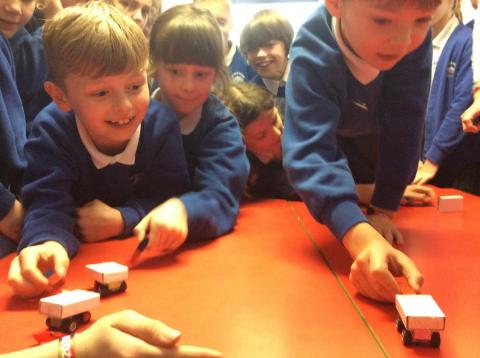 On Wednesday 11th March, Classes 3 and 4 took part in a special science day planned for British Science week. With this year's theme being Our Diverse Planet. Over the two classes we have looked at global warming, magnetic energy and forces.

Class 3 started the day by looking into global warming. The children can answer how a green house works and how this links with the green house effect on Earth. They can clearly explain how the sun provides energy in the form of light and heat. This goes through the Earth's atmosphere and hits the Earth's ground. Once hitting the ground, the energy changes and rises up. As the atmosphere is getting thicker with the increase use of fossil fules and the amount of carbon dioxide that is produced, the heat is therefore trapped and can not escape. This is what is causing the Earth to get warmer.

The children looked at what gases create the greenhouse effect. They know the 6 gases are: water vapour, methane, ozone, nitrogen dioxide, carbon dioxide and sulpher dioxide. The children studied the global warming graph from 1880 - 2020 and could see the spike in the Earth's temperature when abroad holidays became popular (in the 1960s). The class then suggested different ways to travel to reduce their carbon dioxide emissions. Following this the children learnt what creates carbon dioxide - the biggest cause of global warming. They know that fossil fuels including coal, oil and gas creates carbon dioxide when they are burned. Through a lot of discussion the class were able to generate their own opinions about who's job it is to help generate less fossil fuels and therefore creating less carbon dioxide. A lot of children believed it was between us as individuals and the government who need to make the most changes. Following this, the children were able to explain how they could make small changes in their lives to make a big difference and how school could look at cutting the carbon emissions they produce too. The children investigated a range of ways to create electricity including: hydropower with a magnet generator and a water wheel; wind turbines again using a magnetic generator and lastly solar panels. This wouldn't create enough electricity for everyone in the country, but would it create enough energy to power the school? The class extended their learning further in the afternoon by looking at the Paris Agreement 2015. The children were able to discuss in depth if they agree or disagree with the agreement and explain why. Going forward, the children would start to think how we can make changes at school. A simple step is walking, cycling or scooting to school instead of using the car.

Additionally, children learnt about the magnetic force and are able to explain how magnets can attract and repel one another. They created their own magnetic cars and were able to use the non-contact force to race one another. The competition created some really ingenious designs and thought proviking ideas that enabled the children to work scientifically by being able to construct their own magnetic car and verbally explain why it worked well or what needed improving.

Thank you to Mrs Woolley and Dr Dougherty from Skipton Girls' High School for a very informative morning.

Here are the resources you will need for this week's home learning. END_OF_DOCUMENT_TOKEN_TO_BE_REPLACED

Miss Gallagher introduces this week's home learning. I hope Year 4 have a good PE session with Mrs Fawcett and ... END_OF_DOCUMENT_TOKEN_TO_BE_REPLACED